Learning about the Sandinista Revolution in Esteli

There I am, in Esteli a city that proudly displays the red and black FSLN flag everywhere. Estel&iacute; is located on the Pan Am highway and is the biggest town in this region. The population is about 100,000. It is located in a valley at 850m, surrounded by mountains. It remains the biggest pro-Sandinista town in the North. It was founded in 1711 by colonists who left Nueva Segovia because of threats of Indian attacks. Esteli was a stronghold of the FSLN during the 1970's fighting against Somoza's dictatorship. I got here on Wednesday and decided to find a family i can stay with. Off i went to the "mothers of heroes and martyrs" museum and talking my way into finding a host family; I am staying with the woman who is in charge of the museum. The cost is $50 a week including three meals a day (i opted for only 2 meals as i am hanging out in town during the day). I have been working hard the past three days translating lots of stuff for the museum and working away on the computer to have it printed and eventually laminated and then put up in the museum.

Though I am happy that I have found something to do, I will also venture out and explore the area. I am planning on visiting Matagalpa, Miraflor and Selva Negra within the next coupe of days and then I am off to Leon. I am very happy at my family's place as they take care of me very well and make me feel like a part of the family.

I have noticed lots of clothing stores here, more than there are people and more than people have the money to buy things. The grocery stores are chockful of shampoos but no liquid soap. I also noticed that there are still some east German trucks in the country, the good old W50's produced by the IFA company of Lichtenfelde, Germany. During the 80's, East Germany sent many mechanics and engineers to Nica to teach them who to use and repair these trucks. This was our solidarity commitment to the people of Nicaragua. Ever wondered where the foreign aid money goes? It's right here in Central America. Though I haven't seen any US or Canadian projects, there are tons of European and Japanese projects especially in the smaller communities. Spain seems to be the premier builder of rural schools, especially in Guatemala. Germnay and Japan are involved in many street and water supply projects. I went to Matagalpa today and there, the public trash cans are donated by the city of Wuppertal, Germany. It doesn't mean there is no trash anymore, there is tons of it and Central Americans just seem to have the same bad habit all over the place; throwing things out of the bus window and just discard trash in the street. 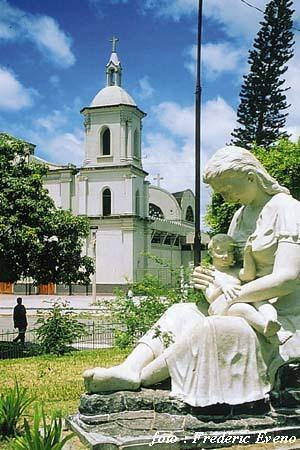