One week Ometepe went by pretty fast. The first two nights I stayed in Playa Santo Domingo which is a one horse village with 5 hotels. During the day, I explored part of the area by bike which was quit an adventure. The roads would have qualified for a strenuous trail in any mountain biking competition; the difference is that my mountain bike has front suspension and working break pads, the bike i used had none of the above. It was not advisable to go swimming as many dead a fish had been showing up over the past week. In Santo Domingo, I met two Germans and the Annett and I decided on hiking Volcan Madera the next day. They were heading over to Balgue to stay at Finca Magdalena and I followed them the next day. I got to the Finca bright and early and there was Anett and another group of people plus a guide waiting. I recognized the other people as fellow travelers I had seen before at the Bearded Monkey hostel in Granada. There was Flora from Holland, Sonia and Diogo from Portugal, and Dan from Israel. Unfortuntaly, the night before it rained heavily and, therefore, the trail was a mess (so were our clothes after the hike).

Volc&aacute;n Maderas (1,394 meters) is the more frequently hiked of the two Ometepe volcanoes. There's a trail starting at the Finca Magdalena that leads to the crater lip, then down into the crater to a, at times, turquoise lake (in our case it was rather muddy due to the rain). You can hike it yourself without much difficulty, but both Magdalena and the other hotels offer guide service, which can be quite worthwhile, especially for the final descent down to the crater lake, which requires a rope descent. The trail, unfortunately, has seen better days. Lack of appropriate maintenance has made a mud pit out of much of the upper stretch of the trail. We spent about 4.5 hours to go up and I spent about 3.5 hours to come back down. We spent two hours at the crater lake.

The day after our hike, I decided to hang out with the group and so we continued around the island to Merida where we stayed at Hacienda Merida for one night. The place was beautiful but the owner was an asshole. While searching for information on Hacienda Merida, I came across a very interesting article written by a fellow traveler who sheds some light on the <a href=http://blogs.bootsnall.com/rasmussen/archives/000741.shtml>Hacienda story</a>. At the Hacienda, we met two other couples who were also at the Bearded Monkey in Granada; Kara and Mark from England and Mave and Martin from Switzerland. It was a lot of fun hanging out with a big group of people.

The next day we left for <a href=http://www.nicamigo.com/sjds.html>San Juan del Sur</a>, a popular surfer spot. The weather has been so, so and the just-hanging-out-and-doing- nothing atmosphere is killing me. I am ready to move on and will head back to Granada tomorrow to pick up my backpack and then take the 3PM boat to San Carlos (14 hour boat ride) near the Costa Rican boarder. From there, I will take a smaller boat into Los Chiles and then hop on the bus to La Fortuna, near Volcan Arenal, Costa Rica. I should be in Costa Rica by Tuesday and will spend only about 2 weeks here. 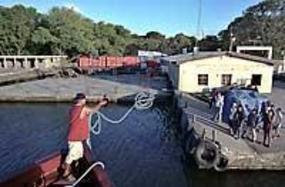 Ferry from San Jorge to Moyagalpa 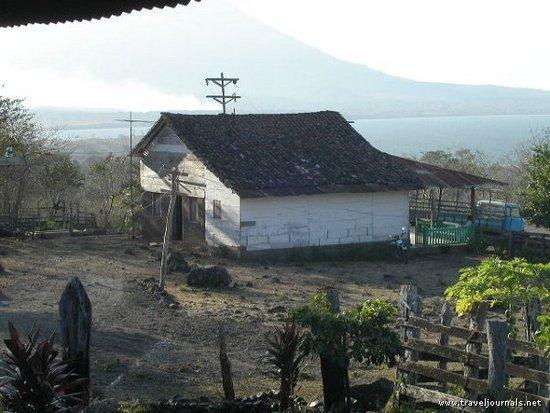 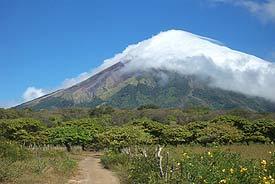