Well, I am back at a computer after a week of abstinence. After I left Leon, I met up wit my friend Patricia in Managua where we stayed with our first hospitality club host. Dieter and his family are from Germany and live in a beautiful house in a quit and safe area. After two months on the road, it was luxury pur...... we had our own little house, great coffee, comfortable hammocks and ate lots of German food (at least I did). We left our luggage behind and went off to Bluefields taking the night bus from Managua. We got to Rama at 4am in the morning and left Rama about 6ish by boat. It was a beautiful sunrise ride on the Rio Escondido. We got to Bluefields around 8ish and made our way through the city to find a decent hotel. Bluefields does not feel like it's part of Nicaraga. People speak Creole and English and the atmosphere is more carribean than Nicaraguan. The town is not a place where i want to spent more than one night. However, when lost or in danger, the best way is to head for a church. So we did and met Father John, a priest from Wisconsin who is looking for a replacement for him so he can retire in the US. Well, the Father took us under his wings and showed us the town, picked the hotel for us, negotiated with the fishermen to get a cheap boat ride to Rama Caye (which we didn't as it is outrageously expensive for just 2 people) and warned us about certain lewd subjects in town. Starving, we found ourselves a breakfast place and as soon as we sat down a guy on crutches came along engaging us in a conversation. His name was John Oliver and he recited a poem for us, then sat down to write the poem in exchange for a coke. He told us his living-on-the-street story in addition to some useful historical information.

In the afternoon, we explored Bluefields and bumped into homeless John twice who attached himself to us both times. By then, he wanted us to buy him water (what he really wanted was beer). We were afraid to go to a restaurant for dinner as John might show up to ask for his dinner. So, we bought some food and beer and went back to our hotel where we had a nice dinner on the hotel porch (leftovers were fed to the dogs).

The next day, after sitting 4 hours at the dock, we left for Laguna de Perlas (Pearl Lagoon). The one hour ride compensated for the wait - we drove through mangrove covered waterways, saw lots of turtles and white and blue herons and enjoyed the beauty of nature. In Laguna de Perlas, we followed one of the boat passengers to Wesley Williams's B&B, the Green Lodge. Pearl Lagoon is not a big community. It has a population of about 2000 people. There is only one primary school and one high school.

Most of the people who live in Pearl Lagoon are Creole, descendants of Afro-Caribbeans and Europeans. Their first language is Creole, a form of English, but most people also speak Spanish. There are also some Garifuna people. In the nearby villages there are many Miskito people, who speak the Miskito language. Further to the north there are Sumas, and to the south, Ramas. There are also Mestizos, Spanish speakers descended from the Spanish. Most people in Pearl Lagoon are Protestants although the majority of people in Nicaragua are Catholic. Here is a poem about the people of the Caribbean Coast.

Home of indigenous people, Hail to all ethnic groups; Hail the Ramas from Rama Cay, Hail the Garifuna who live in Orinoco, Miskitos, Sumos, Mestizos, Hail the Afro-Caribbean descendants, the black race we call Creoles.

We are all special, because of our different languages, culture and traditions. These are the substance which make rich the multi ethnicity of the Nicaraguan Caribbean Coast. 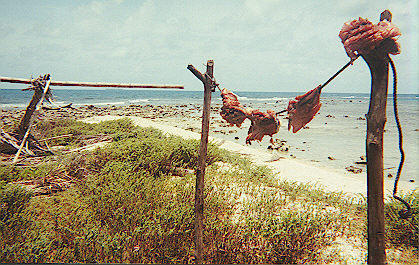 Fish Drying in one of the Miskito Communities 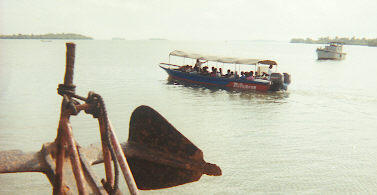 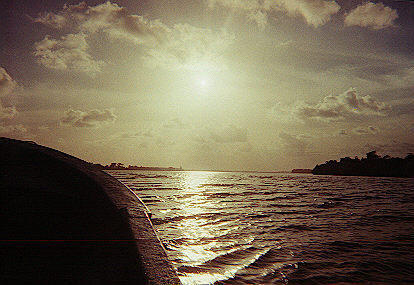