There I am, in Leon. Located just west of Lake Managua, Leon (pop. 220,000) was first established in 1524, though it was destroyed in an earthquake in 1610 and rebuilt in a different spot. It served as the capital of Nicaragua until 1857. Today, the city has a large university student population and is considered the intellectual capital of Nicaragua. Long the liberal hub of the country, it was one of the strongholds of the anti-Somoza forces during the revolution. The Sandinistas still remain a powerful force in the city. Many colorful murals can be seen throughout the city, along with pro-Sandinista graffiti.

The cathedral itself, located across from the central plaza, is the largest in Central America. It contains magnificent colonial religious art and the tombs of some of Nicaragua's most famous citizens, including the poet Ruben Dario, who was one of the most influential Spanish-language poets of the late 1800s and early 1900s. Dario's boyhood home is now a museum highlighting his life and works. Cultural activities are frequent at the renovated municipal theater and at the Casa de Cultura, which has a permanent art collection.

One of the city's greatest attractions is its spirited street life: Mariachi bands and marimba players stroll the streets. Children often go door to door with 10-foot-tall puppets, reciting humorous poetry and beating on drums and trash-can covers. The region north of Leon suffered heavy flooding and landslides when Hurricane Mitch struck in 1998.

It's been of of those days........ after getting all excited that i can take my big backpack with me in the bus and getting a front seat, the bus driver announced 5 minutes later that the bus will not leave for Leon since there are only 8 passengers. Great start. So, I jumped on the next bus to San Isidro, by this time i became friends with the bus driver and the ayudante (the guy who collects the money, puts the goods on top of the bus, fixes the bus if it breaks and sells little goodies to its passengers) who had to go back to Leon since their boss canceled the their route. Off we went and in San Isidro we jumped in the next bus that was supposed to leave whenever there were enough passenger on board. After talking with my two friends and paying my fare to the ayudante, who looked somehow familiar, he asked my how I am doing and if I go back to Esteli. He finally mentioned that I should remember him since he is the husband of one my "sisters" in Esteli. That's why he looked so familiar.

Anyway, it rained most of the way to Leon and I was anticipating the worst. The country needs the rain, the farmers and animals are happy (except for the stray dogs), the tourists are pissed because there is nowhere to go in the rain (except to the internet cafe, where I am). I got to Leon, found my place to stay, a little dorm in the QetzalTrekker house, and met up with Jeff, a fellow travelpod member from whom I stole the bus picture. We went out to lunch and then followed the masses through town as they are heavy pre-celebrating independence day. It was then when Jeff noticed that his wallet was stolen (a travelers nightmare). So, we went to the internet cafe so he could check his account and cancel his credit cards; unfortunately, the thieves had already used two of his cards. We'll see what the rest of the days holds for us. 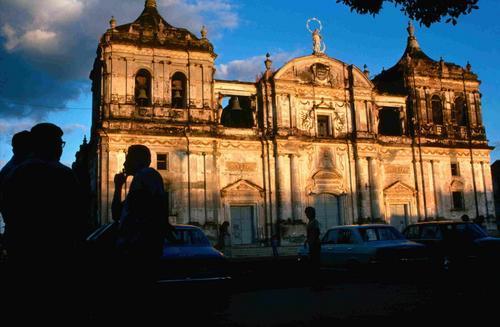